Auto Expo 2020: Evolet India Launches The Raptor And The Hawk

The Auto Expo 2020 is an event where companies come together to showcase the best of their creations. Evolet India has just unveiled the Raptor, take a look.

Evolet India is a Gurugram based start-up that has been catching quick attention in the automobile industry. The company engages in the making and building of electronic vehicles. It recently launched the Raptor Electric Maxi-Scooter and Hawk Electric Motorcycle at the Auto Expo 2020. The Expo is a signature event that witnesses the best come together on a single platform to showcase everything that is best in the automotive world. 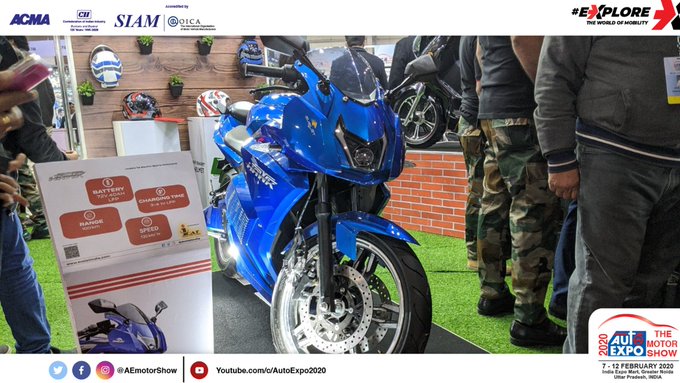 The Raptor reportedly has a 72V battery and a charging time of three-to-four hours. With a range of 150 kilometers on a full charge, the scooter has a top speed of 100 kilometers per hour. Also in the company’s pipeline, they have the much-awaited electronic motorcycle Hawk. The Hawk has a range of 100 km and a top speed of 120 km per hour. It also requires a 3-4 hours charge on a 72-volt battery just like the Raptor.

Before the launch of these latest models, Evolet has also had some other e-scooters which include Polo, Pony, Derby, and Falcon. All the company’s models are priced between ₹44,000 to ₹1,40,000. It also has another model which is an all-terrain vehicle named Warrior and is priced at ₹1,50,000. The usual mileage range of the Evolet’s e-scooters is 65-90 km to a full charge.

With the phasing out of its investments, the company has already allocated around ₹150 crores for its two-wheeler division and ₹300 crores for the e-bus division in order to support its pan India operations and production. The company has about 200 employees in its Research and Development Department. The main manufacturing factories are set up around Haryana, Hyderabad, and Chennai. It offers about 13 products in various segments.